This year, I had a chance to attend JavaPolis 2005 in Antwerpen, Belgium with 3 of my colleagues. I want to provide day by day information about this year?s workouts, and other interesting happenings in my blog. This year?s activity had consisted mainly of University, Conference, BOF, Quicky sessions and lasted 5 days between 12th and 16th of December.

When I recall presentations from University sessions, held on days Monday and Tuesday, the best one, I remember immediately, is Effective Enterprise Java by Ted Neward. It took almost 3 hours, and he presented ideas, which are very useful for anyone, who works on enterprise software system development and deployment. He delivered the content, which consist of items from his samely named book, in such a funny and laughing manner that, at the end of the presentation we all decided that this book is a must read for all enterprise software developers.

The other presentation I attended on Tuesday was from Spring Team, namely Spring Business Tier. Rob Harrop and Jürgen Höller, together performed this one. They mentioned about upcoming features with Spring 2.0 release. Those newest features are about xsd enabled xml bean definitions, xml tags for commonly used elements in Spring bundle, and possibility to define and use custom bean tags, new AOP support, included in Spring, with newest aspect oriented programming capabilities, using AspectJ directly with Spring Framework, and about synchronous and asynchronous JMS messaging support.

Wednesday was the first day of JavaPolis 2005 conferences, Stephan Janssen, chairman of BEJUG, gave a welcome speech in the morning. He mentioned that more than 2000 attendees were present this year, and they were distributed in more than 40 different countires all over the world, except from Portagual. The presentation, made by Jeff Jackson from Sun Microsystems, followed this opening talk. Sun guys throwed java t-shirts against audience by means of their home made ?weapon?! The other thing I remember from this talk was a failed JSF demo, performed by a Java Technical Director using Sun Java Studio Creator ? The last talk in the opening ceremony came from one of BEA?s staff, Bill Roth. He made a little joke about that fiasco, by saying; ?Today, demo God isn?t very happy, so I won?t perform any demo in my talk.?, and indicated previous failure of Sun?s executive staff in a funny way.

I was totally upset with JBoss?s Seam presentation on Wednesday. Thomas Heute performed incredibly bad in his talk. What I remember from this presentation was only, he said in French accent that, ?JSF is a great technology, EJB 3.0 is also a great technology, but there are some missing parts in this view, and Seam will close the gap?, and if my mind doesn?t mislead me now, we weren?t able to see more slides related with Seam than JSF or EJB 3.0 in general. I recalled Henry Ford?s infamous saying, ?I am ready to provide you with a new car, as long as you prefer black and four doors one? here. JBoss looks like trying to make people only to use JSF and EJB 3.0, and only with their application server in this area.O.K., Thomas also said that, it was possible to replace JSF with any other web framework, and EJB 3.0 aith any other persistency framework, and application server just with Tomcat for example, but there were no solid indicators of those promises in the scene as far as Seam?s short life was considered.

The other catastrophe of the Wednasday was EJB 3.0 Simplified Components presentation. I guess, Linda De Michiel had little or no preperation at all for her EJB 3.0 talk this year, because the whole stuff looked as if almost same as the previous year?s slides! After Linda?s turn, Mike Keith appeared on the scene. He revealed a sentence, stating that choosing between annotations and xml based deployment descriptors is a matter of personal taste. Hence, he reduced annotations to an ordinary level by saying so. One could probably ask to him, why then we have all looked for a mechanism in order to get rid of all those DD hell, otherwise it would be just good enough to invest more on XDoclet philosophy. David Geary, during his Shale presentation, criticized such an understanding of the whole annotations concept with a little joke ?

I wouldn?t skip this day without mentioning about Neal Gafter and Joushua Bloch?s presentation, called More Java Puzzles. Their performance really deserved a big applause. Well, actually, I wasn?t able to correctly answer any of their 8 Java puzzles ?, anyway the whole talk was very entertaining. They had weared blue worker dressings, and were looking in them like auto mechanics. What about calling them as ?heavy java workers with blue collars?? 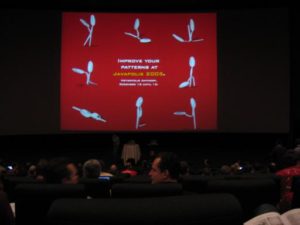 The last talk, I attended on Wednasday was David Geary?s Shale, the Next Struts?. His presentation has partially cleared some of my negative opinions about JSF. JSF has definetely missing functionalities in several areas of presentation layer and Shale aims to close those gaps, in some way or other, and David presented those efforts in a very neat way during his talk. The presentation consisted of topics, including client and server side validations, based on Commons Validator Framework, reusable views, derived from Tapestry, and Web Flows, which is also inspired from Spring Framework?s Web Flow. David joked about this situation, by saying something similar that, ?We have stolen reusable views from Tapestry, and web flow from Spring, too? ? At the end of the Shale presentation, I might say yes for JSF + Shale combination, but only without IBM JSF implementation, and RSA IDE, which is a real memory and CPU exhauster. I would prefer MyFaces open source JSF implementation, and a lightweight ide, such as MyEclipse or Exadel Stuido. They are just good enough for many real projects. By the way, I had just forgot to say that Struts and Shale has no relationship at all, except in terms of their developers!