What is Service Level Auditing?

Many enterprise business applications have such requirements that they should log their users’ operations; who performs and when, records that are inserted into, deleted from database, or are changed during those operations, with a meaningful description about current state of those records. Hibernate already provides an interceptor mechanism at SessionFactory level. Hibernate fires events indicating new records are inserted, old ones are deleted, detection of updates, and other events related with transaction status, session flush etc. By that way one can easily track changes on persistent entities in his application.

I had actually wrote a blog entry about using Hibernate Interceptor, and summarized our experiences while using it in developing an auditing infrastructure. It easily identify, and track users’ activities at the level of persistent entities, but this is too fine grained when we look at them at the level of use case scenarios. For example, let’s take so common money transfer example between two accounts. When a user transfers some amount from account A to account B, there occurs two update operations on those account objects, which result in two separate audit log entries in the database. What is worse is that, those two audit entries are totally unrelated from each other. When someone wants to examine past audit entries, it will be very difficult for him to drive a useful information from that raw data. He will only see changes on those two account objects, but possibly won’t be able to conclude that those changes are related with the money transfer operation. We need to interrelate those two changes at a higher level than that fine grained entity level.

Service level operations look as good candidates in order to make this interrelation, because they usually correspond directly to use case scenarios. If we create an audit log entry at the beginning of a service method, then we can somehow connect those entity level audits with it, and finally persist them all in database. Yes, as you probably noticed that such an auditing operation is obviously a middleware issue, and like many other middleware issues, it is also a crosscutting concern. We could easily deal with such a requirement using AOP constructs. I personally, very satisfied with aopallience’s MethodInterceptor mechanism for implementing concerns before and after method invocations.

Moreover, we need a way to indicate our interceptor to begin a service level auditing operation at the beginning of method execution, and it would be very flexible to do this in a declerative way. Commons attributes is a nice tool in order to implement such a declarative mechanism. We could easily define audit log directives as attributes, which indicate start of service level auditing. They might also be used to provide additional information about auditing, such as type of operation, some explanation about current operation etc. Type information is simply defined in terms of business domain of application, for example, money transfer, account creation etc.

Main Components of Our Solution

The following class diagram depicts main parts of the solution. Service level and entity level auditing work together, and in a close coordination with IAuditLogger interface, which actually performs creation, and persistence of audit log records. 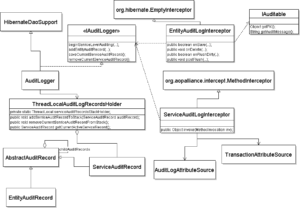 ServiceAuditLogInterceptor starts auditing at service level by delegating actual work to AuditLogger class. We need to clarify something right here. Service beans are obviously stateless, and may serve many clients simultaneously. Between the begining and end of current service method execution, each client may perform many entity level operations concurrently. We somehow need to isolate resulting audit informations of clients from each other. As each client request is handled in a separate thread context, a ThreadLocal variable is a good candidate to keep temporary audit data. We have created an AuditLogRecordsHolder utility class, in which we define a ThreadLocal variable, in order to safely keep audit data during service, and dao operations.

An Example: Transferring Money form One Account to Another

It will be easier to explain internal workings of service level auditing with the help of a simple example. This will also help those who want to employ auditing in their projects. Let’s take our previously mentioned topic; transferring money between two accounts. First of all, we need to distinguish auditable objects from others,as EntityAuditLogInterceptor intercepts save, update, delete operations performed on all objects managed by Hibernate. It will then selectively create audits only for those objects that are marked as auditable. We have created IAuditable interface for this puspose.

How EntityAuditLogInterceptor Logs Save, Update and Delete Operations that Occur on Entities?

In our example we have create Account in our domain model, and want to log operations performed on objects of that Account type. Therefore our Account class should implement IAuditable interface. There are two methods in IAuditable that need to be implemented. getPK() method returns primary key information of domain object. getAuditMessage() method returns descriptive information about object that is being audited, simply it will appear in audit log record.

We have already identified our auditable type, and come to a point that we need a way to get notified when there occurs a change (save, update, delete, or if you want on select) on those persistent objects. Our EntityAuditLogInterceptor simply extends org.hibernate.EmptyInterceptor that also implements or.hibernate.Interceptor. EmptyInterceptor provides with empty implementations of method declerations in Interceptor interface. The following code piece samples what we do when a new entity is saved, an old one is deleted, or is identified as dirty(ie. updated). EntityAuditLogInterceptor receives those events, and checks current persistent entity whether it implements IAuditable interface. If it is an auditable object already, then it delegates the work to AuditLogger to create a new EntityAuditRecord for that entity.

The following diagram shows the sequence of operations mentioned above.

So far so good. We are already able to intercept changes on our persistent entities, and create audit log records for any changes that occur on them. However, we are at a point that we create log records at entity level, and those audits are independent and unaware of each other. Therefore, we need a mechanism to interrelate those audits with each other and with their belonging business service so that user activities could be tracked on a higher level. As stated at the begining part of this article, service methods are very good candidates for this. What we need is to provide a non intrusive way to activate auditing at service level so that we can trace activities of our users in a more meaningful manner.

We declare a service interface for those account related business operations. It is named as IAccountService as shown below.

The business logic is very simple here. We extract given amount from source account object’s balance, and add it to target one’s, and than call account DAO object’s update method for both of them. AccountHibernateDAO simply delegates update operation to HibernateTemplate as you see below.

We employ ServiceAuditLogInterceptor to manage start of auditing at service level. It is a MethodInterceptor that intercepts some method invocations and enables developers to perform operations just before and after of those invocations. Creating and configuring those interceptors using Spring Framework is a really easy task. You only need to define for which beans those interceptors should be created, and Spring provides those beans as wrapped by interceptors to client code using its dependency injection mechanism.

Spring provides BeanNameAutoProxyCreator to create proxies for the beans, which are specified with matching beanNames attribute and wraps those beans with listed interceptors. Above application context configuration piece shows that beans with the name suffix of Service will be intercepted with both serviceAuditLogInterceptor, and transactionInterceptor instances in the written order.

What Happens When ServiceLevelAuditLogInterceptor Intercepts a Method Invocation? 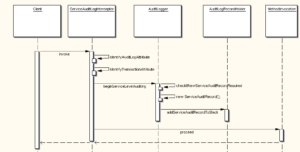 How Do We Save Audit Information at the End? 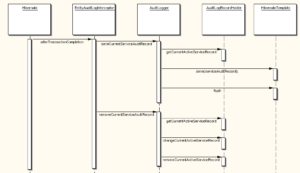 Some service beans that enable auditing may call other service beans’ methods that may also trigger auditing. Currently we only create a new ServiceAuditRecord when a new transaction is created for those service methods. For example methodA may be a top level service method that is transactional and auditable. Hence, only some other method called directly or indirectly from methodA, which has a Spring’s transaction attribute PROPAGATION_REQUIRES_NEW will trigger creation of a new ServiceAuditRecord. Otherwise, all entity level activities will be logged under ServiceAuditRecord instance of methodA.

We currently provide following Audit logging operation types for both service and entity level audits. It is always possible to extend this constant list, and define new constants for your specific needs. Our current example actually creates its own AccountAuditLogConstants interface and define SERVICE_LOG_TYPE_MONEY_TRANSFER constant.

Auditing is a commonly appearing requirement in many enterprise business applications, and it is an ordinary middleware issue that need to be solved in a non-intrusive way. Spring Framework and Hibernate together provide a nice infrastructure for us to implement such a requirement in generic and reusable fashion. As a result, developers are only in charge of implementing an interface for entities that need auditing, and pointing start of auditing at service level on it.

You can find source code of service level auditing with a simple example herelinkext7.gif?. There might be slight differences between sequence diagrams and actual executing code, as I had reshaped code after writing this article. Anyway, you shouldn’t have a great difficulty in using service level auditing in your project.